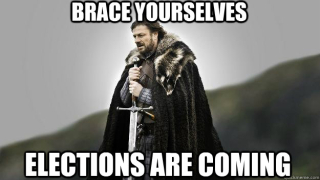 Any UFF USF member may run for any one of these offices:

These four elected officers, and the Chief Negotiator and the Grievance Chair (both appointed by the President), make up the Executive Council. In addition, the USF Chapter of UFF sends representatives to two union bodies:

UFF USF members may run for either senator or delegate or both; UFF USF members running for an office may also run for one or both representative positions.

If you are interested or wish to nominate another member, please start the process by downloading, filling, and sending the nomination form to the Election Committee. All nominations must be received (in our hands) by Friday, March 1.

Ballots will be sent out on Monday, March 4, and must be received (in our hands) by Tuesday, March 19. They will be counted at a special meeting on March 21 to which all UFF members are invited.